What we need to calculate this performance ratio: Radiation sensors as much as the number of facades and at the same angle as the panels on the facade for instance 2 irradiation sensors for 2 different facades

A remote monitoring system from the power plant that can process and present production, radiation, and temperature information with flexible infrastructure.

Let's do a sample study on Solarify;
In Loggma GES power plant, there are 10 inverters. 5 of them are connected to panels facing the north facade, 4 of them are facing the south-facing panels, 1 inverter is mounted on both the south and north-facing panels on an MPPT basis. We can separate the powers of the inverters, which serve on both fronts and are separated on MPPT basis, in the Solarify term system. Let’s say, the nominal power of the system facing the north facade is 297 kWp and the nominal power of the system facing the south facade is 190.08 kWp. First of all, we need to create a term in Solarify. The terms are actually a powerful infrastructure that allows us to formulate all data collected by Solarify, generate graphs in analysis, generate alarms under certain conditions, and give flexibility to Solarify.

Energy terms will be taken directly from the energies in the inverter outputs. For example, while the output power of the 5 inverters is taken separately for the Northern energy term, only 1 MPPT of the inverter serving on both sides will be calculated.

Energy terms will be taken directly from the energies in the inverter outputs. For example, while the output power of the 5 inverters is taken separately for the North energy term, only 1 MPPT of the inverter serving on both sides will be added to this term.

You can examine how the terms are calculated from our help page at the link below; https://solarify.io/en/docs/settings/stations/terms/

I put the north energy term we created here as an example, 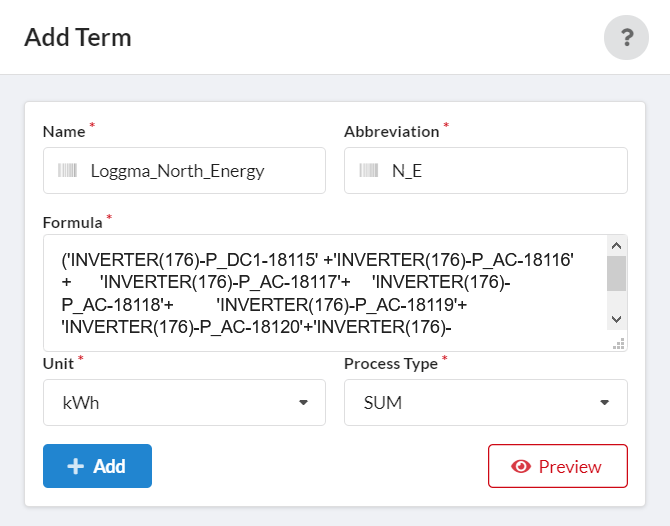 After saving the terms, we will be able to see the past PR calculations by using the retrospective calculation feature.

After creating the terms and doing the retrospective calculation, we need to define a virtual station under our main power plant. You can find detailed information on how to create the virtual station at https://solarify.io/en/docs/settings/stations/stations-list/

The trick is that these virtual stations, named North and South, will take the terms of Energy, radiation and temperature data from the terms we just created.

Now, we can see the performance ratios of the panels with different fronts on the roof and our solar system correctly and compare them with each other.